For George Taylor’s first solo show with Pangolin London she presents a compelling body of new work, testament to her desire to stretch the possibilities of sculptural form, in which she has applied her signature use of an array of exotic feathers that echoes the painstaking practice of making Andean death shrouds, to complex optical imagery from the canon of modern art history.

The impulse for the work came from Taylor’s search for a conceptual language that would accord with her personal experience of the natural world – she lives and works on a farm in a secluded Gloucestershire valley – connecting with what the philosopher Gaston Bachelard has termed ‘Intimate Immensity’ in his book The Poetics of Space, 1958, – a poetics of embodied sensation where the image comes before thought, association and memory before reasoned judgement. Indeed, Taylor’s self-portrait, Submersion, 2017, has a membraneous translucency which rhymes the colour of her hair and the pheasant feather frieze of the art work she is absorbed by and emerges from and is a defining emblem for both her and our inextricable link with the natural world.

Taylor extends Bachelard’s statement that “immensity is within ourselves” where he correlates metaphorical associations between internal architectural spaces and inner emotional states, to the continual movement, cycles of life and death, of the natural world. For her, such a sensation is a quintessential form of sculptural experience, of inner vastness experienced most intensely at the epiphanic moment of stillness, a liminal point where looking without and looking within meet and interchange. Taylor refers to a seminal passage in Bachelard’s text where he cites Gabriele d’Annunzio’s image of a ‘trembling’ hare, paused momentarily in a frosty Autumn field:

‘Its gaze seems to confer peace upon the entire universe. And it would be hard to think of a surer sign of deep peace than this motionless hare which, having declared a truce within eternal disquiet, sits observing the steaming countryside. At this moment, it is a sacred animal, one that should be worshipped’.

It is at such a moment – this still point of awareness that reveals an unravelling of continual movement – where Taylor enters into dialogue with the hard-edge abstraction of Bridget Riley by overlaying the optical play of the seminal forbear’s work with the variegated texture of feathers. The unalloyed materiality of this medium, whose iridescent surface sheen conjoins with underlying earth colours to produce subtly mutating hues – rich madder reds of the golden pheasant or celestial blues of the kingfisher – amass to form modulated ‘fields of movement’ enhancing the sensation of gliding, the visual pull into the space of the imagination. Such a narcotic effect of being lulled inwards, ‘One might say that immensity is a philosophical category of the daydream’ as Bachelard says, is enhanced if not inherent in the quality of the material itself. 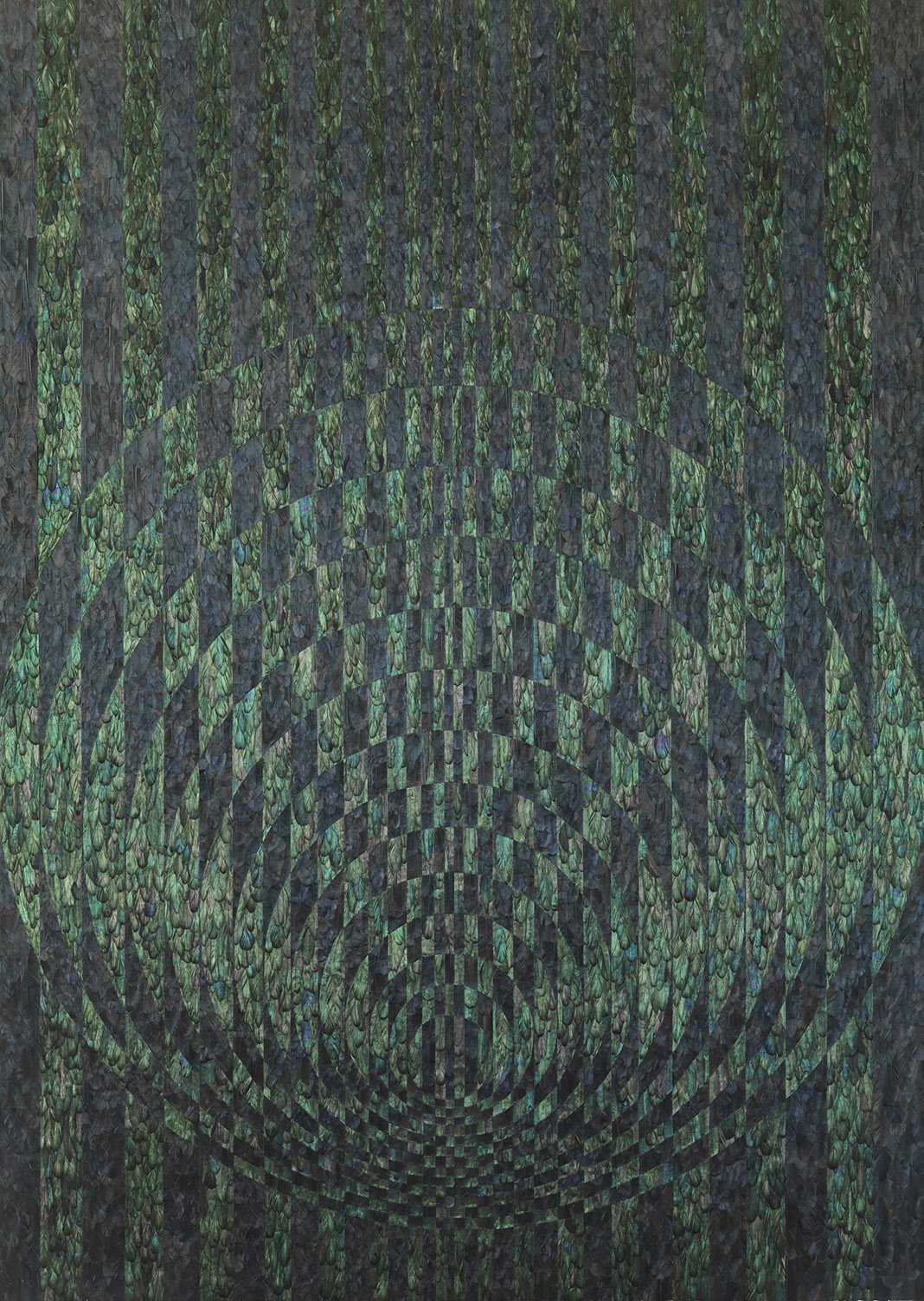 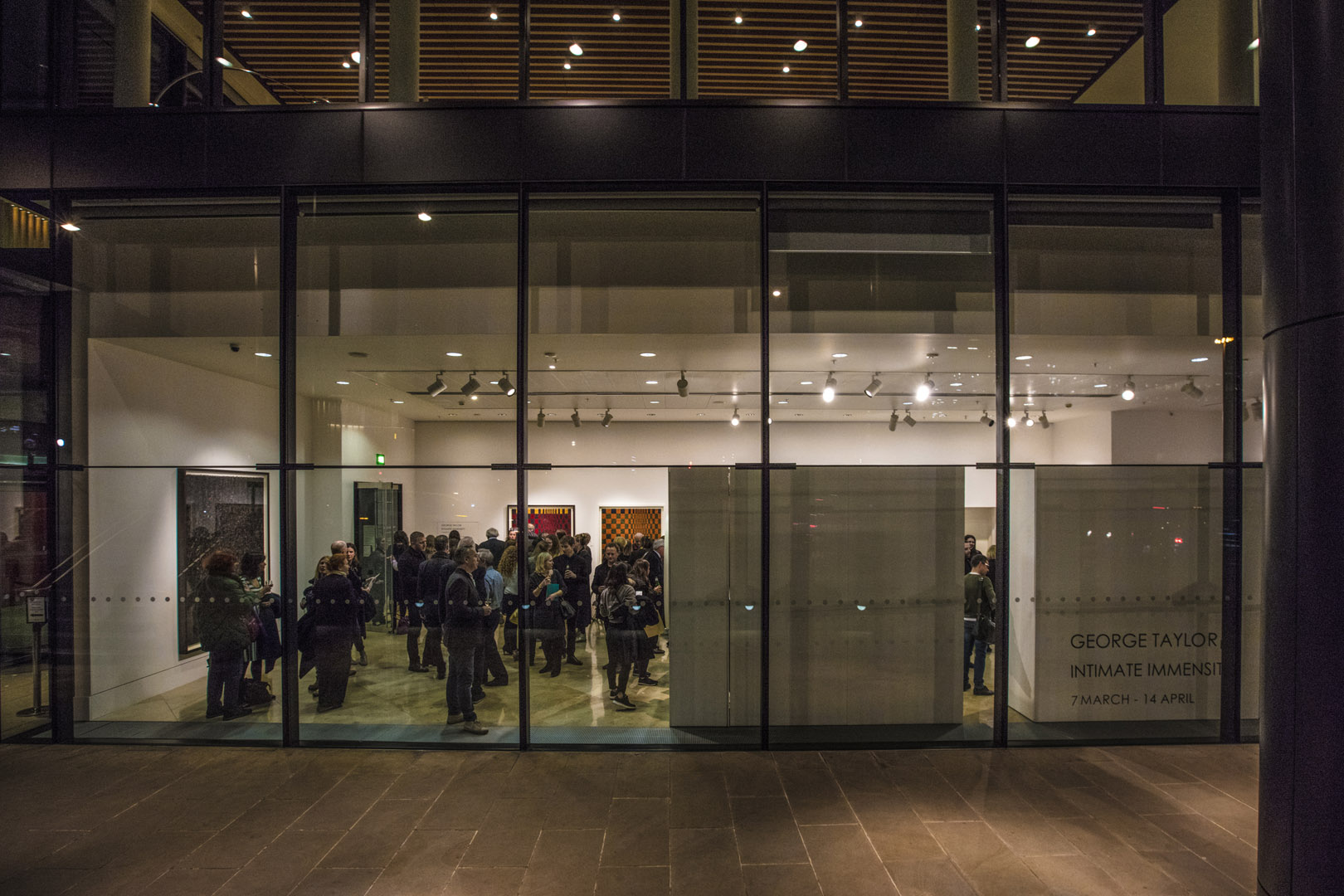 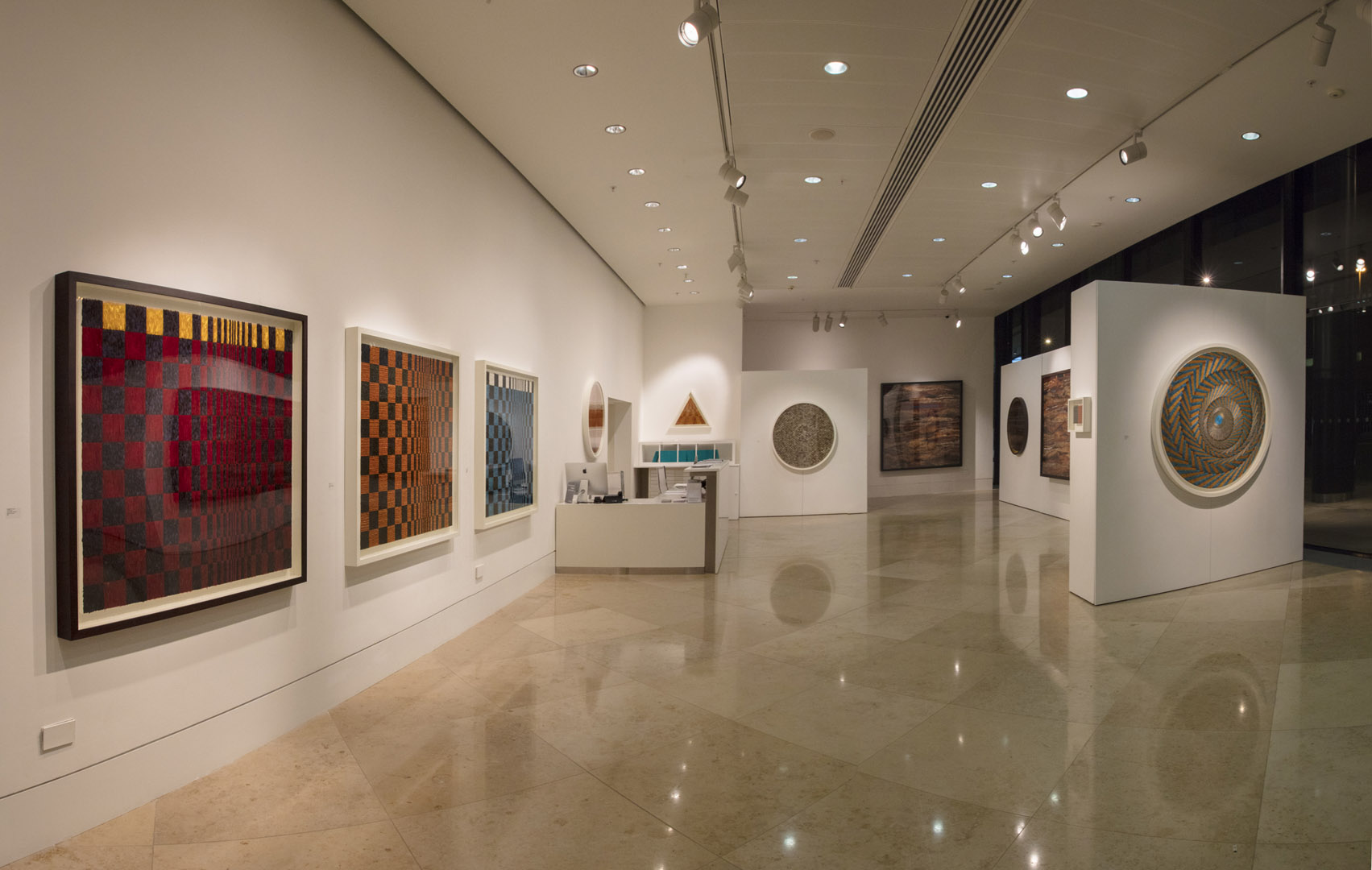 The Beast in Me, 2017, with its scale and darkness, whose orientation of pattern reveals itself through the alternate lay of crow feathers, articulates Taylor’s sculptural seeing, the interaction of opposing planes of movement as a form of dialogue that parallels the interaction between natural and cultural worlds. These shifts of register are achieved with a technique of such precision and gradualism that the work is as much a physical as a visual encounter, an experience set in the world. As Luce Irigaray says in Elemental Passions, 1992, ‘movements in the world of the senses are almost imperceptible. Only an attentiveness that is not rigidified with formal frameworks can detect this kind of movement’. The work Erotica: Return To Chaos, 2016, extends the vertiginous sensation of relative movement enhancing the design’s spiralling sensation with colour; turquoise blue and warm gold feathers combine to create an almost ethereal sensation.

Crucial to Taylor’s phenomenological approach is her formative work in the fashion world – her experience of the subject of what film theorist Laura Mulvey termed ‘the male gaze’ – becoming acutely aware of life lived through the body rather than as disembodied conceptualized abstraction. Indeed she took on this role deeply aware of Irigaray’s influence – as the latter maintains that for female emancipation:

‘New models of sexual identity must be established. Woman must…not be subordinated…to the values of masculine identity…she therefore needs her own linguistic, religious and political values. She needs to be situated and valued, to be she in relation to her self.’

Such sensuality loops back to Taylor’s initial research for her body of work, to her rereading of Georges Bataille’s Story of the Eye, 1928, captivated by its metaphor and discussion of the sacred practice of transgressive eroticism. Reminded also of Bachelard’s statement that ‘everything round invites a caress’, she constructed discs of quail eggs set in subtle hexagonal patterns that keep the viewer’s eye dancing in a kind of Brownian motion, and then coalesce into a hallucinogen of spirals that call to mind the golden section, the sacred geometry of the Renaissance. Such a dance is Taylor’s discovery; openness to natural systems heard from within, of the body as the whole world in itself, an ‘intimate immensity’ a unique sensorial language that is at once primal and contemporary. 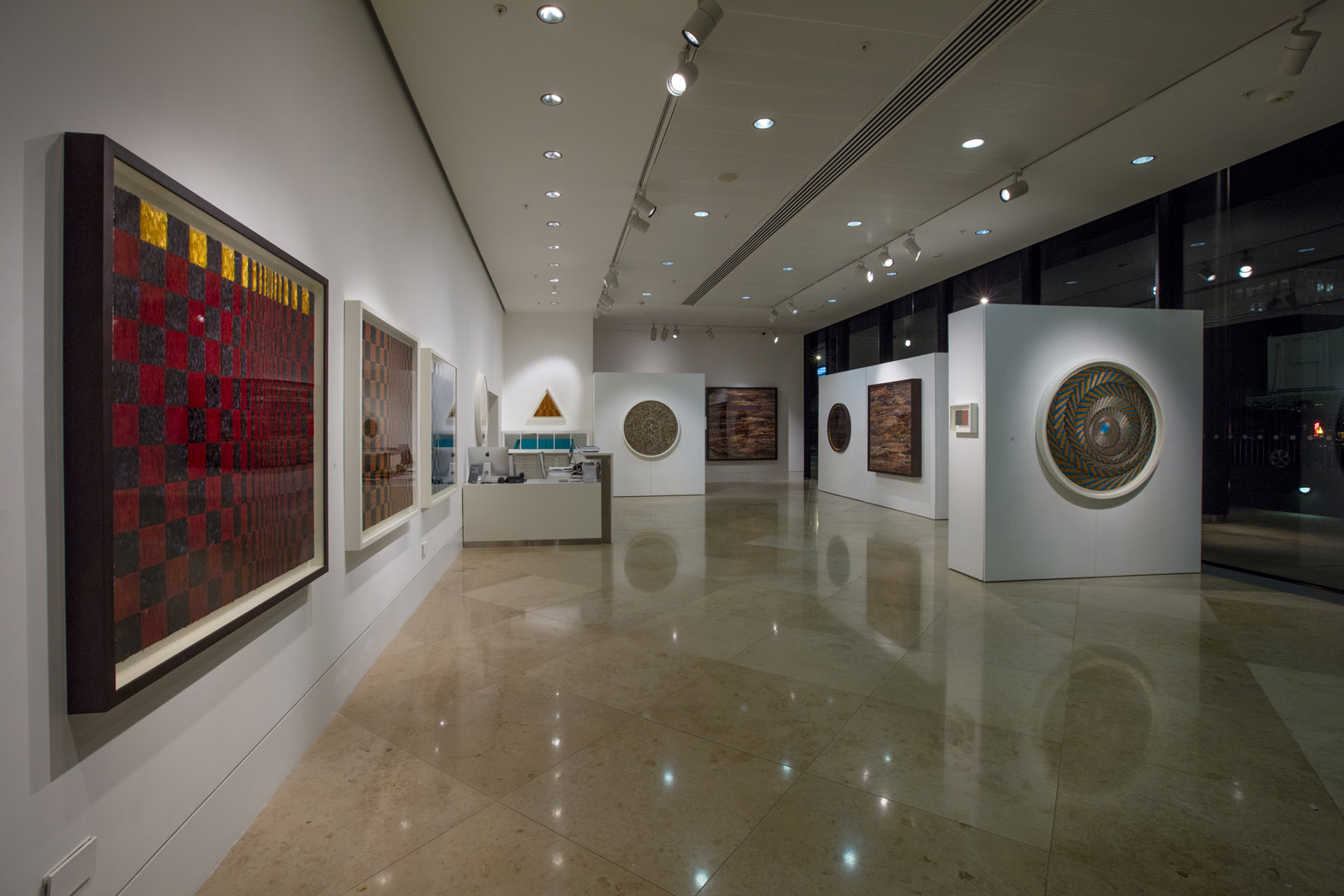