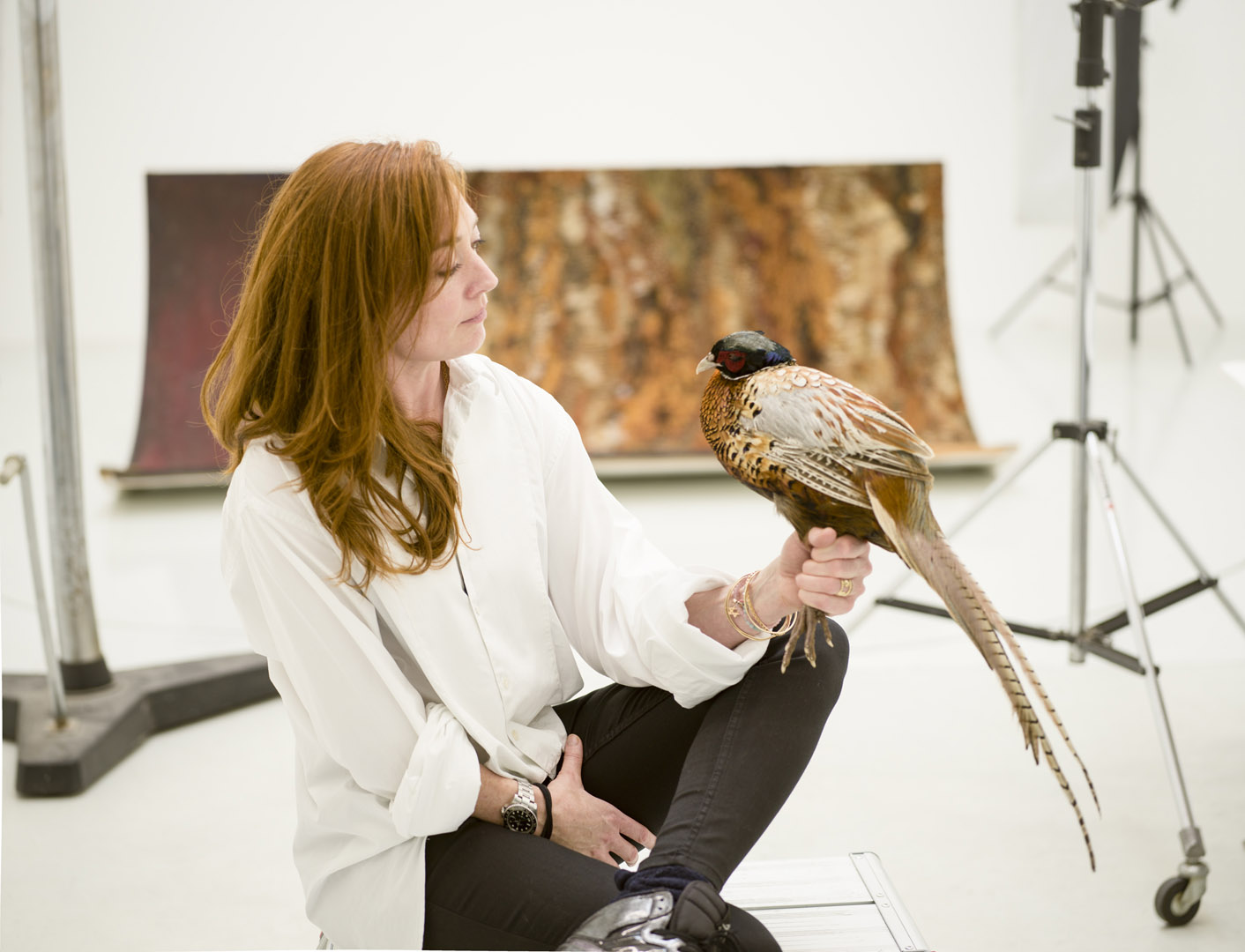 Born in Macclesfield in 1975, George Taylor moved at the age of 10 onto the farm set within its own steep-sided secluded valley in a remote part of Gloucestershire. Here she began working with her father as he tended livestock and managed the woodland, initiating what has been a lifelong enchantment with the natural world especially as a creative environment beyond landscape solely as a leisure destination – more as a site from to engage with contemporary issues such as embodied experience in place.

At Bretton Hall, University of Leeds, she experimented with sculptural form and constructed environments, introduced by tutor John Penny to the work of Minimalism and Land artists such as Walter de Maria. Indeed the latter’s ‘Lightning Field’, 1977, prompted her to install six 30-foot steel poles in the small lake in the valley. Yet her urge to form a new creative language, as she says “Donald Judd meets Meret Oppenheim”, which could speak of the daily reality of life and death in farming, particularly at lambing and calving time, drove her to work with the residual materials of living forms, animal skins such as goat or snake, then ultimately feathers. Her studies culminated in 1998, with the creation of total immersive environments where the viewer was oriented in a single direction through feather-lined passages connotative of our passage through life, articulating her interest in Gaston Bachelard’s metaphorical evocation of the links between phenomenological architectural spaces and the nuomenal world sensed from within our body and memory, succinctly captured by his phrase ‘intimate immensity’.

Work following College saw Taylor continuing her exploration into expanded possibilities for sculptural form and environments as art assistant in the studios of Dan Chadwick and Science Ltd, and in the Fashion Industry, strategically applying herself to the role of the ‘motivating object’, the subject of what Film theorist Laura Mulvey has termed the ‘male gaze’ by working as model with the creative director, Isabella Blow.

In 2008 she presented a body of work entitled ‘La Petite Mort” at Scream Gallery in London. Stimulated by Georges Bataille’s writing on ‘transgressive religious practice’, rituals of sex and death, the exhibition consisted of a series of wall-based sculptures, concave-shaped discs designed to capture and amplify sound covered with her signature ‘landscape’ of modulated feather patterns that in turn connoted the death shrouds of Andean culture. The entire exhibition space was suffused with a specially designed aphrodisiac scent lending the work an entirely kinaesthetic experience.

Her current body of work emerged in 2013 from a little sculptural sketch that felt compelled to make on re-reading Georges Bataille’s ‘The Story of the Eye’, where she glued five blown quail’s eggs, originally destined for lunch, to an old satellite dish in a perfunctory yet deliberate hexagonal pattern. As she scaled up the pattern onto four foot discs, the relation between the intricate complexity of each egg’s surface and its bare pale interior sparked in her mind a passage from Luce Irigary’s text ‘Elemental Passions’ that refers to the open exchange of the kiss, ‘But when lips kiss, openness is not the opposite of closure. Closed lips remain open. And their touching allows movement from inside to outside, forn outside to in, with no fastening nor opening of the mouth to stop the exchange.’ The lips are as a moebius strip where inside and outside surface combine, interchange and replace one another in an erotic dance that evokes the play of presence and absence of life and death. Taylor then embarked on the gesture of ‘softening the hard-edges of Minimalism’ by taking seminal Bridget Riley Op Art compositions that suggest this open folding in and out, overlaying the graphic design with the variegated hues and exotic texture of feathers, as both homage and gauntlet.

With marriage to James Massey, the birth of their two children and launching herself into the role of full-time artist she moved back to the farm of her childhood to dedicate herself to the intensive time consuming labour of realising this long term project.

Taylor’s work is in various collections, including the Groucho Club, Murder Me and Pangolin Editions.